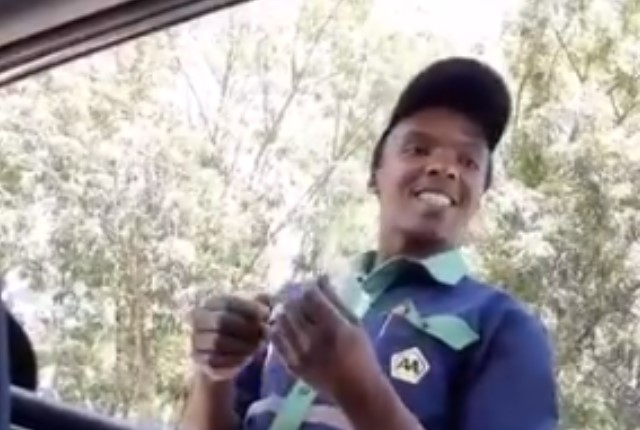 JOHANNESBURG – What was a prank meant to humiliate became a blessing in disguise for a petrol attendant from KwaZulu-Natal.

South Africans have banded together to contribute funds to Siphamandla Wiseman Ndabezitha (38), a petrol attendant who works at the BP Quarry Service Station in Pietermaritzburg.

In a video that was secretly shot by an unidentified man, that went viral on social media on Tuesday, a confused Ndabezitha is seen holding two R10 notes given to him by the customer.

The attendant has worked at the garage since 2012.

Incidents like these do happen in South Africa and most of the time, petrol attendants are left to foot the bill from their already meagre salaries.

Fortunately for Ndabezitha, who also supports his pensioner mother and three children all while building a house, his employer Wayne Smith stepped in to cover the R210 to avoid a loss at the time.

“I had to watch the video three times to actually believe what they had done. But I was taken in by the way Wiseman wanted to own the problem and I definitely couldn’t let him do that, so I footed the bill from my side, Smith says.

“All my staff have been with me for close on 10-15 years, they are like family to me. Wiseman is very close to me, and had been a huge help to the business.”

He said the normal procedure, when customers run off without paying is to open a case, but never make it the attendants’ fault.

“Unfortunately, we have to wear these things as a loss on our side.”

Ndabezitha says his boss is a kind man who is always ready to help whenever one has a problem.

He only completed grade 10 as he came from a poor background, and his elder siblings did not have stable incomes.

“I wished I could have finished school, but I couldn’t because I had to find a job to help out at home.”

The 38-year-old said when the incident happened, he was shocked.

“I wasn’t expecting it because I didn’t know he meant R20, I know ‘two ten’ as R210. I had no money on me that day and thought I’d have to speak to my colleagues or else my boss was going to deduct it from my salary.”

Ndabezitha said the customer came back the following day to pay the rest of the amount.

After seeing the humiliating experience on Twitter, South Africans offered to donate money to Ndabezitha. This initiative was spearheaded by social activist and corporate attorney, Tumi Sole.

Good Samaritans have been donating amounts ranging from R100 up to R210.

“One should not forget that South Africans often come together, especially in these types of situations. We’ve done it before for Mama Thabethe who was arrested during lockdown for selling atchaar, South Africans came together and contributed and the same with Wiseman. So that spirit of togetherness continues regardless of our differences,” said Sole.

Ndabezitha said he couldn’t believe it when Sole contacted him and told him that people wanted to donate and asked for his banking details.

“I thought it was a prank and they were playing with me. But then some women came to my workplace before I arrived on Wednesday and as the day went on, I got bank deposit notifications. I am very pleased. Thank you to everyone who has donated. God bless you.”

Thousands have been raised so far, and Ndabezitha says he has plans for the money.

Report of the Section 89 Panel Relating to...

We spoke to SAFM about #BacktoSchool and safety...